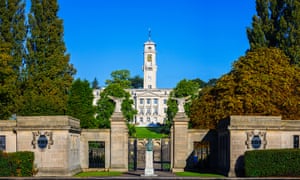 Overview
The University of Nottingham is a research-focused campus university which has been described as “the nearest thing Britain has to a truly global university” by the Times, with campuses in Malaysia and China as well as the UK. It is the fifth largest university in the UK and a member of the Russell Group, Universitas 21, the Association of Commonwealth Universities and the European University Association.

Admission to the University is highly competitive and Nottingham regularly receives one of the largest numbers of applications per undergraduate place in the country. Over 30,000 students are currently enrolled, just over 9,000 of whom are international.

Services for International Students
The International Office at the University of Nottingham offers a wide range of services for international students before and during their studies to give them the best possible preparation and support in the UK. This includes arrival help and orientation for the University and the city, opening a bank account, extending visas, social support and English language support.

As well as numerous trips to places like York, Oxford and Scotland, the University also participates in programmes which allow international students to meet and live with English people nearby, in order improve language skills and learn more about the culture.