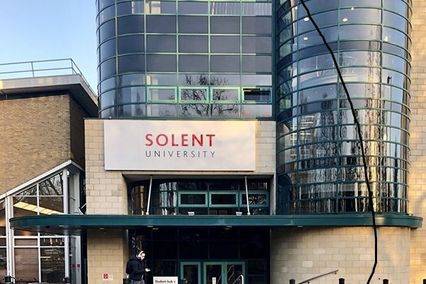 Solent has been a university since 2005, incorporated as an independent higher education institution in 1989, the University's origins can be traced back to a private School of Art founded in 1856. Mergers between Southampton College of Art, the College of Technology and the College of Nautical Studies at Warsash laid the foundations for what is now Solent University.

Solent currently has around 11,000 students from 100 countries enrolled and has a strong reputation for ‘non-traditional’ subjects, offering courses in computer and video games design, comedy writing and performance and yacht and power craft design.

Maritime subjects make up the University’s biggest programmes, with an internationally recognised training and research facility for shipping and offshore oil industries part of the main campus. It is also one of the best University yachting institutions and the student team has won the national yachting championships four times in the last six years. Solent continues to produce internationally significant research in this area.

The International Advice Team provide a free minibus service from Southampton Central train station, as well as an International Welcome Week to introduce students to Southampton, the University and each other. Support on a number of topics is available during term time and pre-sessional and in-sessional English language classes are also available.

Solent was shortlisted for the Times Higher Education University of the Year prize in 2019 and is currently ranked among the top 25 universities in the UK for ‘Student Voice’, ‘Academic Support’ and ‘Learning Community’ (National Student Survey 2020). Other achievments include:

Solent University has over 2,300 accommodation places spread across six halls of residence, one of which is designed for returning students and postgraduates. All bedrooms have a washbasin and 1,000 are en suite. The various residences are within walking distance of the campus, and generally consist of flats with 7-10 students per kitchen.

Southampton is a vibrant and lively city just over one hour from London. There are convenient transport links to UK and European cities. The tourist towns of Winchester, Salisbury and Bournemouth are nearby, as is the New Forest and the world-famous Stonehenge. The English south coast, upon which Southampton is located, offers one of the warmest climates in the UK.

Known throughout history as the ‘Gateway to the World’, Southampton remains a significant international port. It’s marina has hosted high profile international boating events such as the Volvo and the BT Global Challenge Round-the-World yacht races.