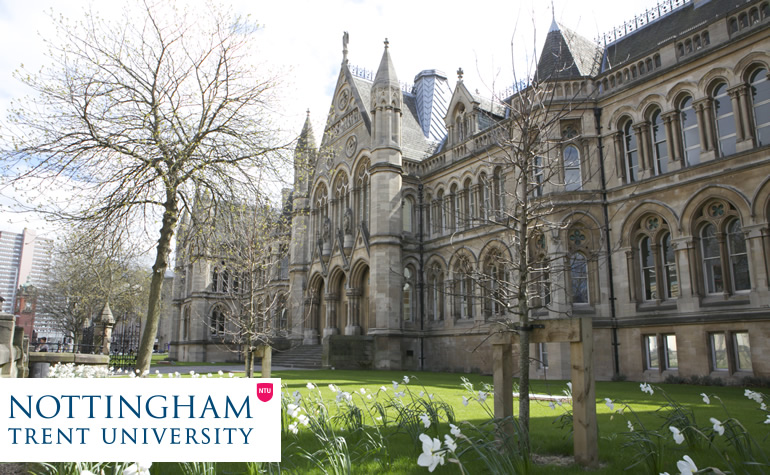 Nottingham Trent University is spread across three campuses, two in Nottingham and one just outside the city, and it is one of the largest universities in the UK with 28,000 students currently enrolled. Nottingham Trent was originally founded in 1843 before officially gaining full university status in 1992. 93% of Nottingham Trent students would recommend studying at at the University following the National Student Survey and it was named 'University of the Year' by Times Higher Education for 2018.

Nottingham Trent University is best known for its Art and Design, Fashion and creative arts programmes, but it also hosts one of the UK’s largest law schools. The University also does well in sports, with strong performances in the British University and College Sport leagues. The University recently received one of the biggest grants to a post-1992 university in order to continue its work on cancer diagnosis and therapy.

Nottingham Trent are partnered with 50 academic institutions across 40 countries, with some programmes at the University also offering the chance for students to study abroad. 93% of Nottingham Trent undergraduates were in employment or further study, just six months after graduating following a survey of leavers.

Following the 2014 Research Excellence Framework, 90% of Nottingham Trent’s submitted research was classified as ‘world-leading', 'internationally-excellent', or 'internationally-recognised'. The areas of Biomedical Science and Engineering both impressed the most.

International students are guaranteed a room for at least one year in Nottingham Trent University accommodation. There are 4,200 self-catering rooms available either on or close to the campus, most of which are en suite. These are generally arranged in flats or houses, with private bedrooms and a shared kitchen, although studio apartments and shared rooms are also available.

Cost of living is very reasonable in Nottingham compared to many other parts of the UK, meaning that private accommodation can be found cheaply and easily through one of the university’s recommendations or house hunting days.

Nottingham Trent University has three campuses. Located just north of Nottingham city centre, the City Campus is home to Business and Management, Law, Social Sciences and Art & Design programmes, the Clifton Campus is home to Nottingham Schools of Arts and Humanities, Education, and Science and Technology, while Brackenhurst houses the School of Animal, Rural and Environmental Sciences and has its own dairy farm.

Nottingham is approximately two hours by train from London and students make up 10% of the population, lending a unique student-friendly feel to the city. Living costs fall below the national average, making it an affordable place to live and the city currently has one of the highest rates of job creation in the UK. It is famed for its connection to the legend of Robin Hood and tradition as a centre for manufacturing during the Industrial Revolution.